In the land of Pakistan, every day we come across several names who are working for the betterment of their country as well as themselves. These names, though not surprisingly, never run out; there is always a new person who achieved a new big thing.

Mehak Gul is one of those plenty names. Mehak is a young Pakistani girl who first came into limelight at the age of 12 because of her passion for chess. Chess, being one of the oldest and respectable games, exists at pure strategy; relying solely on the player’s wits. It definitely isn’t a piece of cake; experts study throughout their lives to master its intricacies. Though its concepts are simple, yet they can expand to an infinite number of possibilities. Mehak seems to fit perfectly in the character of an excellent chess player, as her passion and accomplishments have hinted.

After brilliant Pakistanis managing to occupy places in the Guinness Book of World Records, Mehak Gul  too proves to be successful in that case. She, at the delicate age of 12 in the year 2012, made a world record of setting the chess board in the shortest span of time, taking just 45 seconds to do it.
After such an excellent achievement, Mehak decided to pursue the activity in which her talent extended to be increasingly admirable. At the small age of 12, Mehak was chosen to be the part of a 10-member team who set off to participate in the World Chess Olympiad to represent Pakistan in Istanbul; a big event which hosted players from up to 160 countries.  Mehak, at the time was the youngest person ever in the Pakistani team to be performing at such a huge platform; snatching the title which was previously held by a 15-year-old girl from Karachi.

Mehak had been into the business of chess since she was six. After she faced success in attaining positions at national and provincial levels, she was thought to be eligible to do the same at an international level as well. In the year 2012, she was successful in acquiring third position in the Punjab Chess Championship and standing fifth in the National Chess Championship held in Karachi, thus helping her to enter the Pakistani team.

Her success doesn’t end here: she came back proving herself to have grown better at the game when she won the 3rd Punjab Chess Championship 2015. Jumping from 3rd position to the 1st shows how Mehak has improved herself. Mehak showed rare confidence winning all five games at the championship with ease. The top seeded player for the championship was Urooj Saeed, Pakistan’s current No. 2 woman chess player and a member of Pak women team at Tromso Olympiad. By virtue of her defeat at the hands of Mehak Gul on top table in final round, she had to be content as runner-up. Mariam Ejaz claimed third position.

There are not many highly rated women chess players in Pakistan and women tournaments have just started to be organized. But as more and more young women and girls in different universities are adopting Chess, there are hopes for a better future of the game in Pakistani women.

The young chess player aims to be a Grandmaster, a title given by the World Chess Federation.
Indeed, where there’s a will there’s a way. Mehak is coached by her father, Mohammad Zahid. She has an innumerable amount of talent flowing through her and she can definitely go places if she continues to pursue her passion with the same enthusiasm. 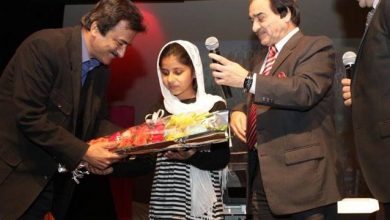